Science is interesting to me and when I was a child, I used to learn by asking questions on how a particular scientific theory relates to my daily life. It has helped me so much and I don’t mean just in terms of grades.  I jumped on the chance to preview the BASF Kids Lab for 2016, because the brief sounded like the children would have a lot of fun while learning science and that’s the kid of initial impression I want Joy to have about Science.

I learnt later that the BASF Kids Lab programme is a yearly CSR project by BASF conducted by actual scientists to bring science education to children. For free. Its a nice way of giving back and it has benefited children in over 30 countries.

Details of Kids Lab 2016 in Singapore are as follows:

The programme is extremely popular and registrations have since closed for this year ( I hope you got the news from my FB / IG accounts and managed to secure a seat!) but if you’re wondering how this year’s Kids Lab will go here’s a brief:

Each child is equipped with an apron, a pair of lab googles, a small booklet and a pen. They are then assigned to join a table where a plastic tray containing real lab equipment they will need for their experiments are already laid out. 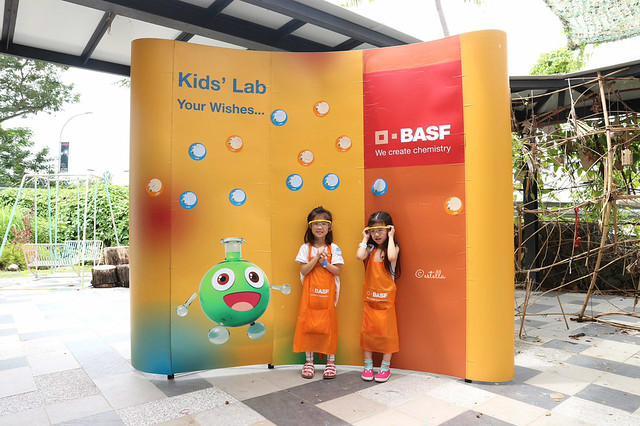 Getting briefed / acquainted with equipment

The children are then introduced to chemicals in an awesome, engaging way, using bouncing balls, rubber duckies and other items which I’m sure children can relate to. 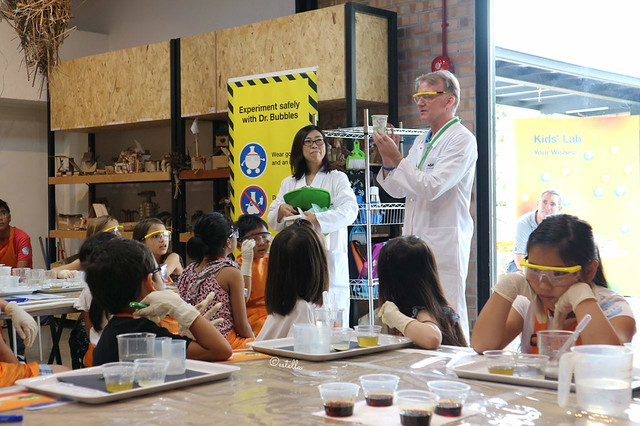 There is a main facilitator and another facilitator attached to each table to help out. Joy and her friend are younger, so they received help from the facilitator who gently guided them by example, then let them carry out the experiments themselves.

Where is Vitamin C?

The first experiment was to investigate which foods (Green Tea vs Lemon Juice) contains more Vitamin C.  They used Iodine as a testing medium then added green tea / lemon juice to be tested drop by drop. This activity is simple but yet teaches them to act and make observations first before acting again. 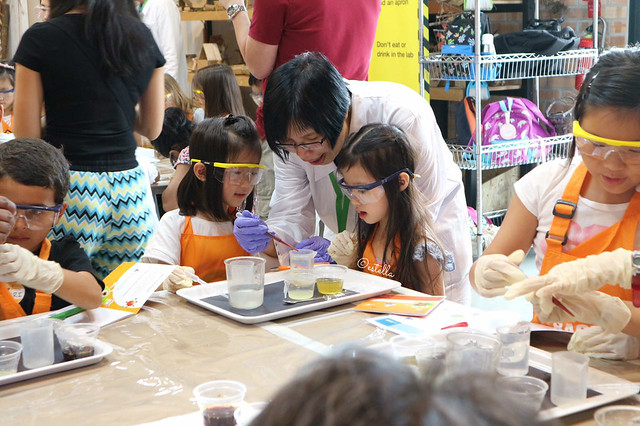 Joy and her friend are about 5 years old, so they received quite a bit of assistance but I was very happy that they also got to conduct the experiment by themselves at times. They could understand what was going on with the help of the facilitator and after the programme, the two of them tested their parents on what they learnt. 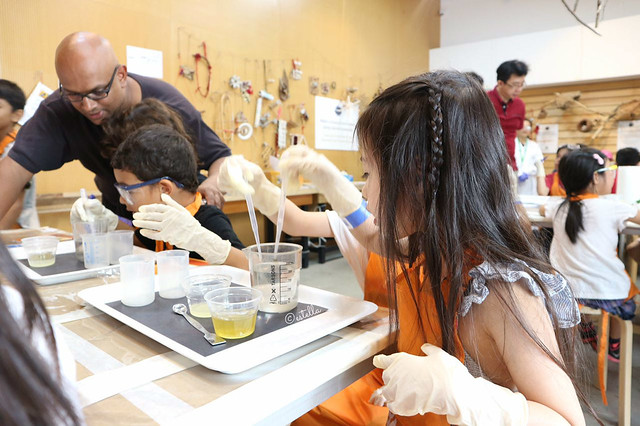 Joy and her friend are not able to write as well at the moment but I liked how the main facilitator asked the children to note down their observations in a note book. Scientific recording!  What you write down, you’ll remember and that helps with your investigation, right? 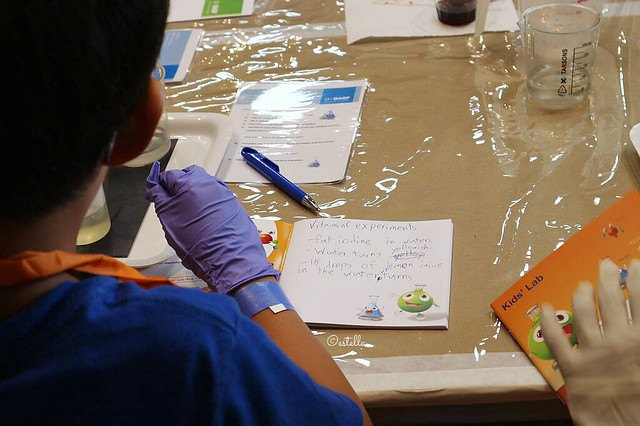 There are two experiments in the programme. Not too much and not too little content. The second experiment gives the children an understanding of the damage that can be caused by sun exposure and they get to experiment to see what materials can help us block out or reduce sun damage.

They tested with newspapers, cloth and their lab googles by shinning a torch through these materials to see which ones cause the UV detector to turn purple (indicating the presence of UV rays). 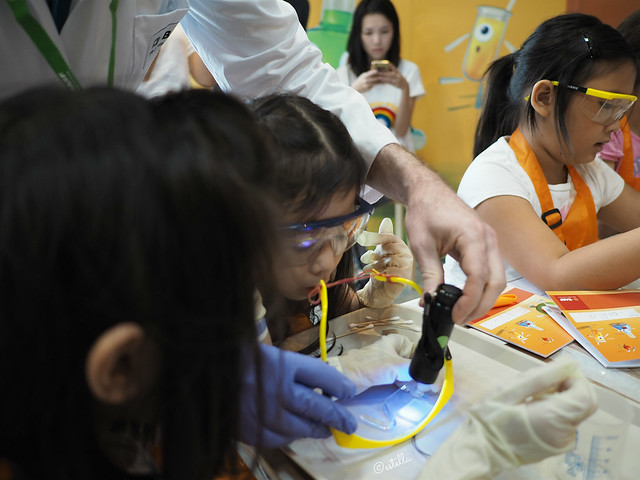 And then they were taught step by step what to mix, to get a sun screen. That’s not all, they got to test to see if their sunscreen worked by applying the mixture to half of the UV detector and leaving the other half without protection. I like that it teaches them not to assume that what you’re told will work, will work – always test it yourself! 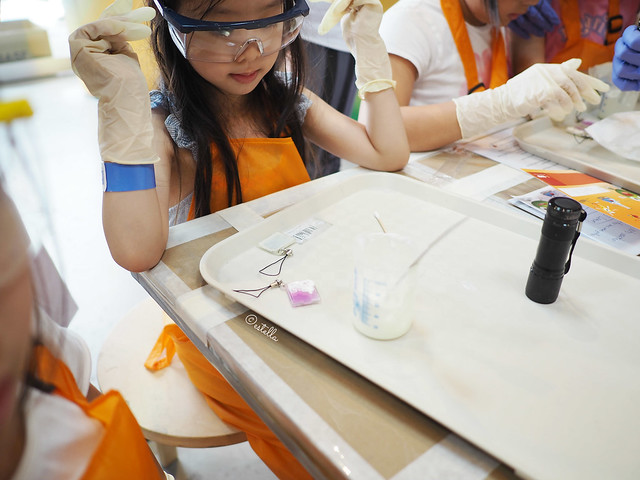 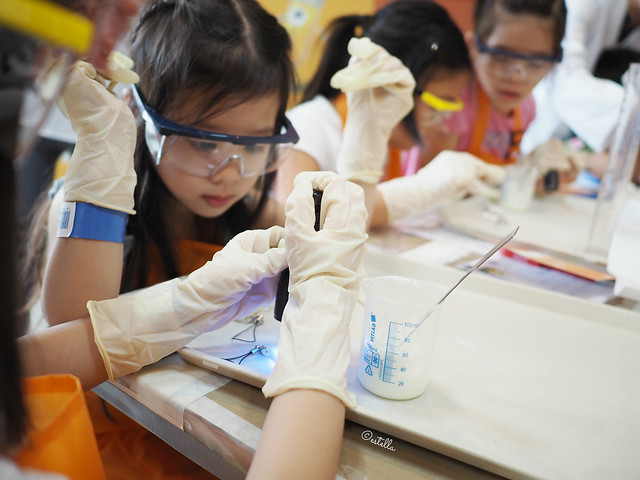 Joy and her friends are young but I feel that they have benefited from this exposure to science and what makes me happiest of all is that it was fun to them and they remembered some of the things they learnt from the exposure.

Big thank you to BASF for opening up our minds to science, and to Playeum (where our preview was held) for being such an awesome, creative environment.

Disclosure: This was a media invite by Playeum and BASF which, we are so grateful for.