Disclosure: I have no kitchen.

Not yet, and until I have my own, any appliance I bring home needs to be useful, both in my eyes and in the eyes of my in laws. So, you can imagine, I was shaking with excitement (COME TO MAMA!) but trembling in fear when I learnt that we would be blessed with the Philips Avance XL Airfryer .

My strategy was to make sure the in-laws deem the airfryer as an important and necessary part of the kitchen. I was confident because the new Philips Avance XL Airfryer features… 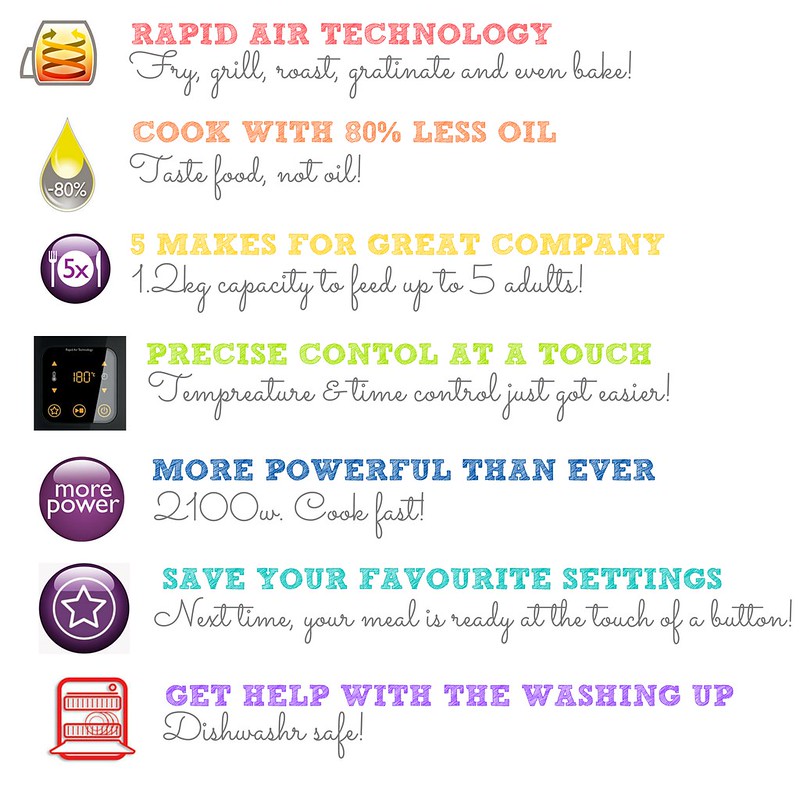 After browsing through the many inspiring recipes on Dable Kwan’s (Philips Airfryer’s Number 1 fan!) “I Love Philips Airfryer” Facebook community, I decided that I’ll make the in-laws’ absolute favorite dish – roasted pork belly. I had my doubts ( *glups* me, the noob cook? can I really sio bak?) but I went ahead anyway.

Here’s the recipe (adapted from the recipe on Bake, Cook & Love) everyone’s been asking for, ever since I posted photos on my Instagram.

First, I cleaned the pork belly of any excess hairs on the skin, gave it a light wash and then cut lines on the meat portion like this. I think that more of the dry mix will get into contact with the meat in this way. 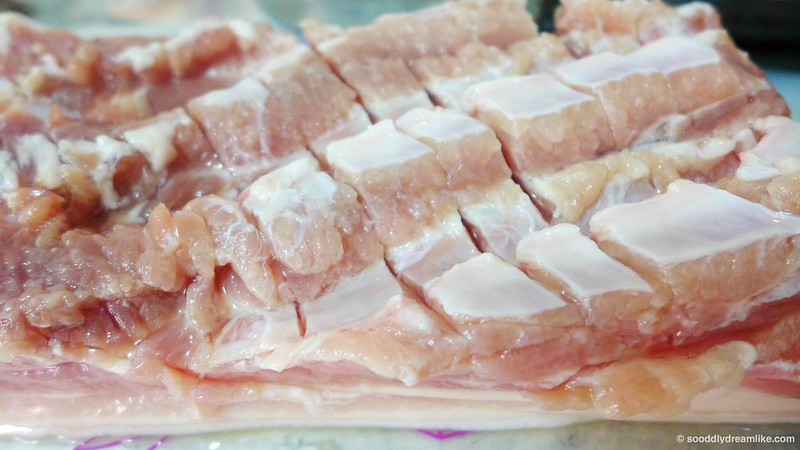 Next cooked my pork belly in water while I prepared the dry mix (mix all the ingredients up, that’s it!).

For the dry mix, I added rosemary on purpose and the salt accidentally (true story). The recipe on Bake, Cook & Love didn’t require more salt than the garlic salt but I added an additional 2 tsp of pink sea salt in a moment of blurriness. It turned out just a little salty but so far, I’ve tried making again without and it didn’t taste as good so I’m including that in my ingredient list but lessened to 1 tsp. 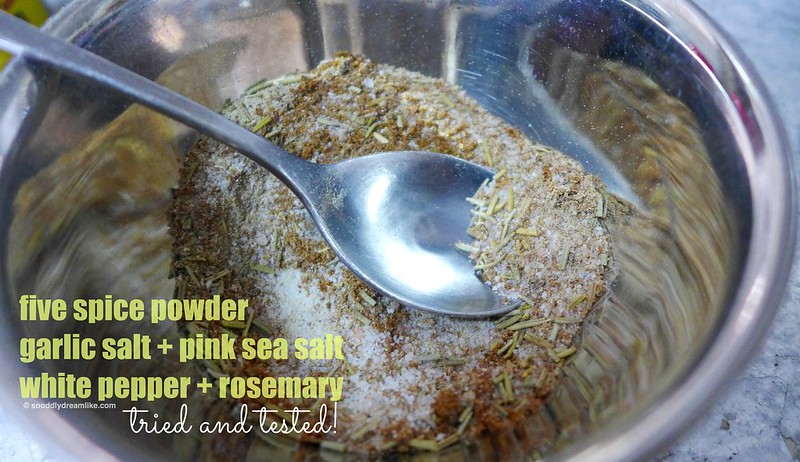 I wasn’t really sure how “pork belly cooked thoroughly” looked like but mine was cooked for around 8-10 minutes, or until it looked like this:

When I was happy with my cooked pork belly, I removed it from the water and let the meat air dry for 3 hours, forgot to drain off the liquid (true story) and then rubbed in the dry mix. I think the air drying bit helps make the skin a little tougher to make your life easier for the next step. 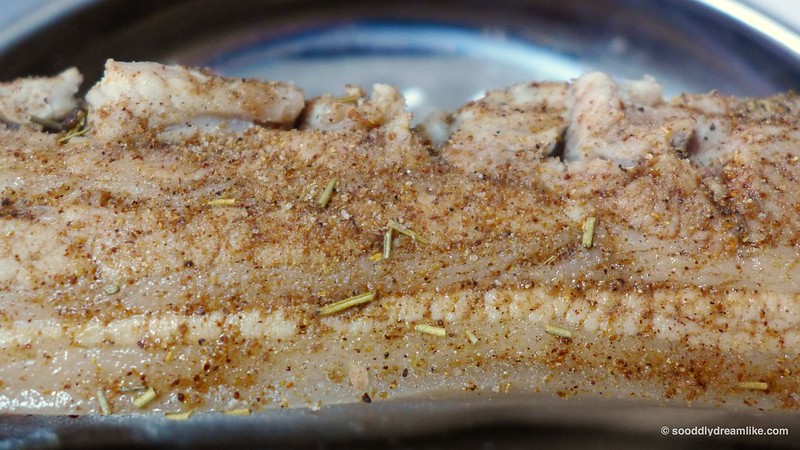 After air-drying, I scored the skin with a knife and pricked as many holes as I can because many recipes mentioned that the more holes, the crispier the skin. I didn’t get the pricking tool but I discovered that it’s quite easy to do so with a small fork (I used fork meant for small people, aka Joy) but don’t try it with a large fork. 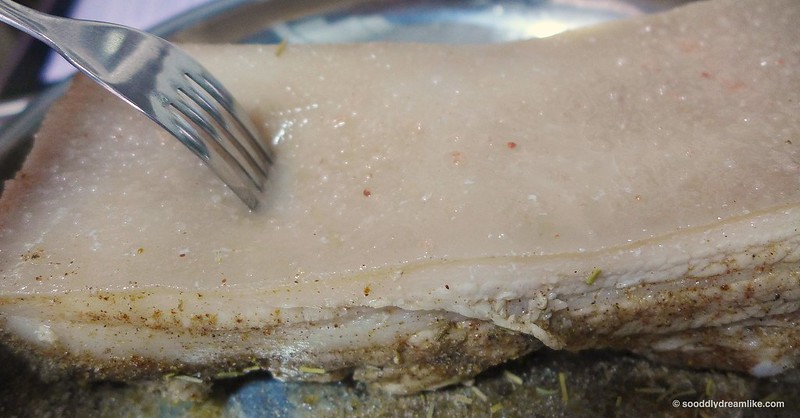 And then, I rubbed some salt on the skin and squeezed fresh lemon juice liberally all over the skin. 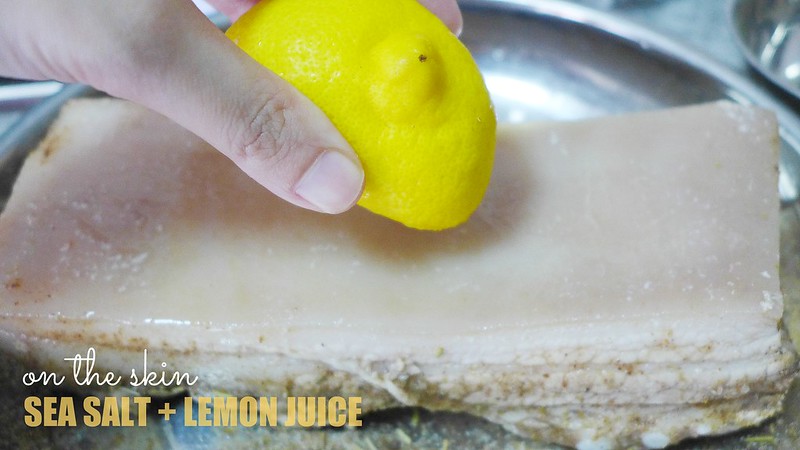 Next, I put my pork belly in the fridge to dry it up even more. By order, to prevent my meat from contaminating the fridge, I covered it up with a cling wrap. This picture was taken “before”. 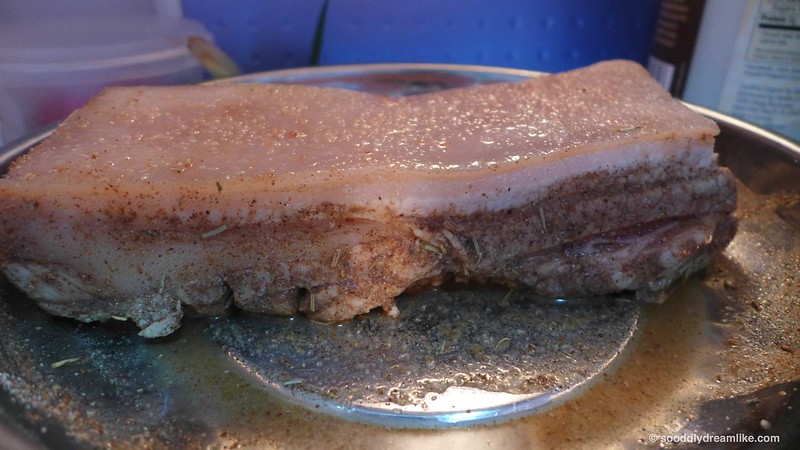 My pork belly was in the fridge from 4pm on Preparation Day to 11am on Roasting Day (next day), which makes it a total of 19 hours. Sounds like a long time but I did nothing in that time so, to me, it’s not really a time cost. I was so bold as to ask our favorite roast pork stall owner if drying in the fridge is really necessary and he said “Oh, no need, just air dry for 3 hours also can”. Now you know.

This is my pork belly, in my airfryer (after my airfryer was pre-heated for 5-10 mins at 160 degrees). 700g fits perfectly when placed diagonally, skin facing up (I typed this in specifically because someone close to me, ever faced the sides up and we ended up with Sio Bak that didn’t look as good.) 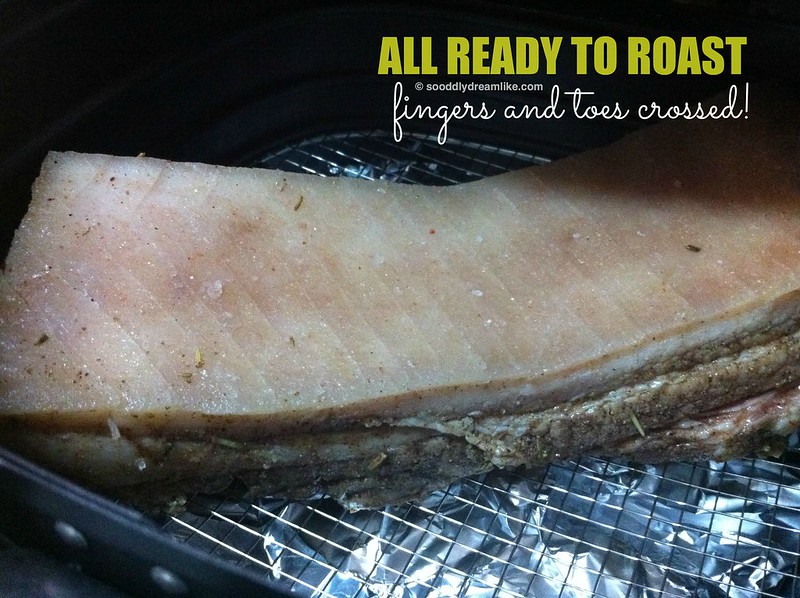 Per the recipe, I let hot air circulate around the meat at 160 degrees for 30 minutes, to cook all sides evenly and retain more moisture. After 30 minutes, my pork belly finally started looking like sio bak (yay!). The colour was gorgeous but take a look at the skin… at this point, I was worried that the crackling wouldn’t happen! 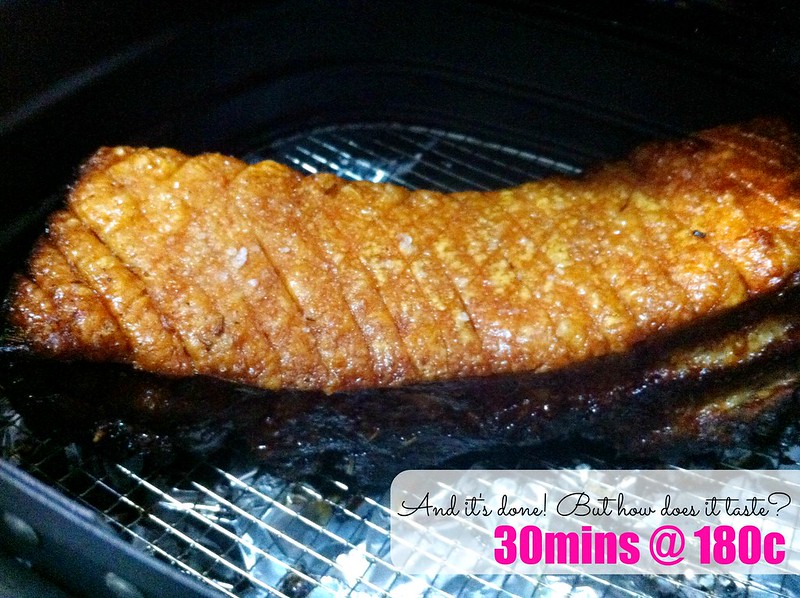 Still, I pressed on and set my airfryer to cook my sio bak (yes! I can refer to it as “sio bak” now!) for another 30 minutes at 180 degrees. That must one of the most excruciating waiting time for me in recent times. I resisted the (strong) urge to open up the “drawer” of the airfryer to sneak a peek at my roast meat ever so often. I learnt later on that it’s totally ok to check on your meat if you want. In fact, the tray of the airfryer can be pulled out like a drawer and even hold it’s own on a table, like this:

Since the airfryer allows me to control time and temperature precisely, I could totally go away and do something else but I hovered around anxiously. While waiting, I took this picture of the touch screen controls that made my life easy because it looked so classy. Gotta love technology! 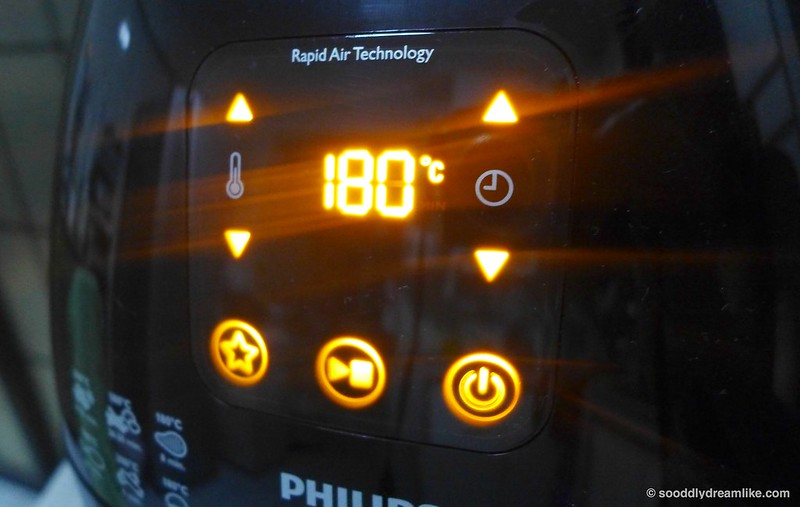 Time’s up and tadahhhh, my sio bak turned out like this! 美美hor? (Beautiful, isn’t it?) 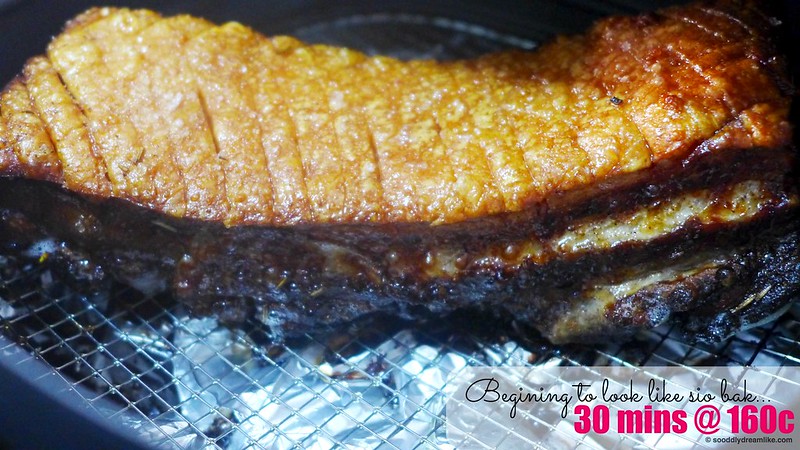 I waited with bated breath while my sio bak rested in its tray. The new airfryer is much easier to handle than before because the tray can be easily lifted as a whole, no more pressing buttons when holding the handle (a problem the older range has). 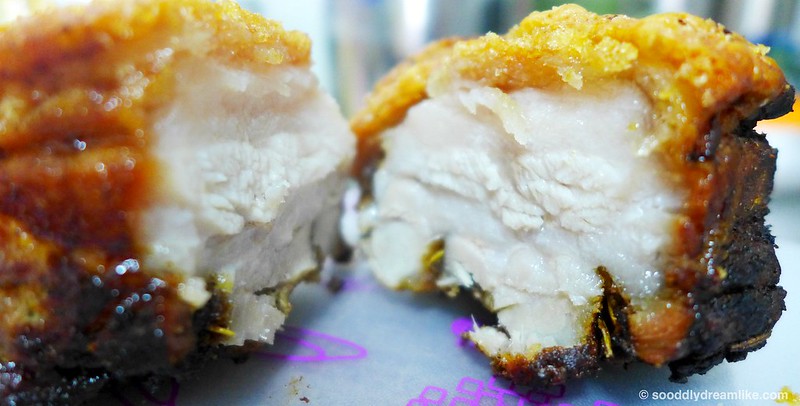 I no kid you, just look at this close up! 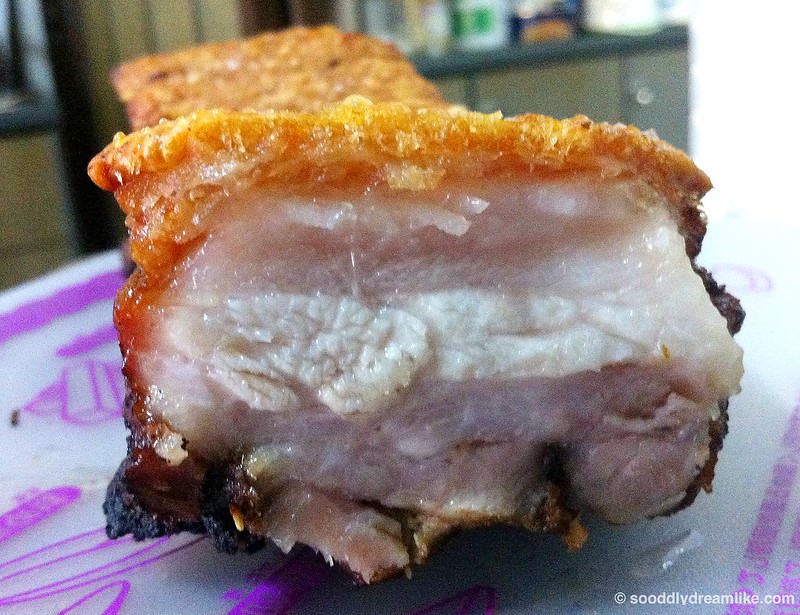 When my sio bak cooled, I didn’t taste it. I packed a few pieces hastily and went out to meet the band mates for lunch. When I was roasting my sio bak, we were on whatsapp chatting about it and I decided that I would taste it with them. 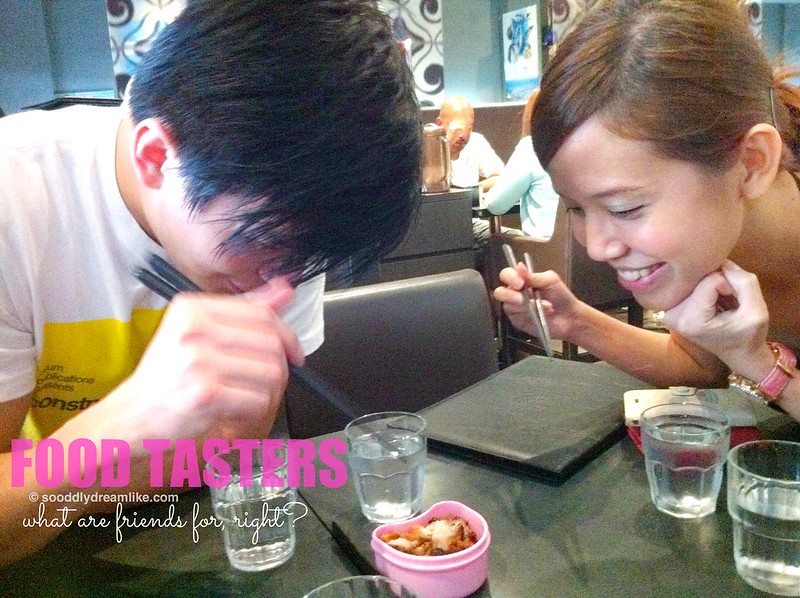 I guess that means mission accomplished and done B.E.A.U.T.I.F.U.L.L.Y in an hour (as compared to 2-3 hours in a conventional oven) by me, the noob cook! Now, I can easily make delicious sio bak each and every time!

I like the airfryer not just for it’s ability to impress the in-laws but also for the precise time and temperature control at a touch. Like for traditional frying-in-alot-of-oil recipes, they always mention “when the oil has reached the correct temperature”.. like how would I know what is the right temperature? So far, I have air-fried reckon chips, chicken wings and ikan bills with great success. It’s so easy to use!

Also, the cleaning is not a nightmare. I found it easy to clean off the grime with a soft sponge like this:

The basket below can be removed from the “drawer” and cleaned thoroughly: 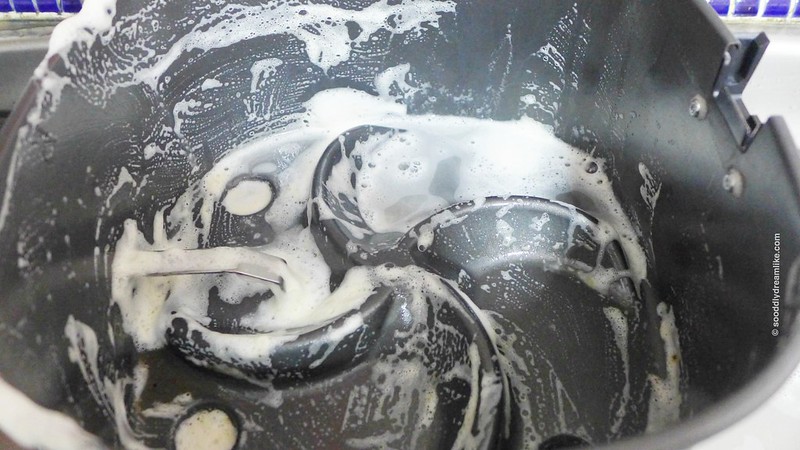 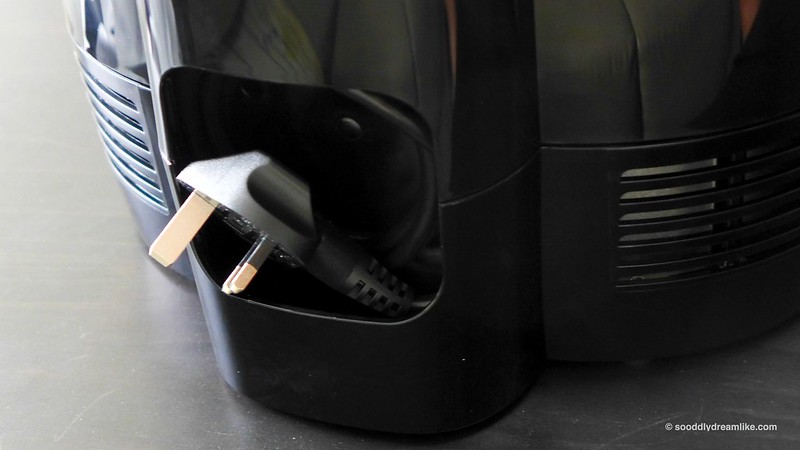 Disclosure: I received the Philips Avance XL Airfryer for reviewing purposes. No compensation was received for this post. All opinions are my own

Philips Avance XL Airfryer : Baking the best in chocolate lava cake (in my world) with my mom

Nourishing Almond Milk made with Philip’s Beauty and the Beast – The Jamie Oliver Blender!